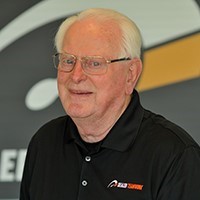 John comes to us most recently as the Data and Operations Manager at Visible Customer. He was previously a management trainer and a territory manager for 48 large automotive dealerships in MN and SD for Who’s Calling, which was originally MRI LLC, and was sold to Who’s Calling. John has been affiliated with the automotive business since 1962 and has worked for Stapleton family members since 1977.

His successful career includes several management, director and VP-level positions in the advertising, data, and marketing industries, most of which were in New York City. The companies John has been involved with ranged from early-stage start-ups to mature stage organizations such as Reach-McLinton, Young and Rubicam and Bozell International. Several companies ultimately were either acquired or merged with other organizations.

John was a Staff Sgt. in the United States Air Force Reserves and competed internationally for the USAF rifle and pistol teams. He has also spent many years as a guest lecturer speaking about his successful experiences in Marketing and Advertising at St. Thomas College in St Paul, MN.

When John isn’t working, he enjoys spending his time continuing to absorb as much information and news as possible and sharing it with a passion. He also unselfishly shares his time volunteering at various organizations: The Children’s Home Society & Family Services of ST. Paul MN, the FCA (Families with Children from Asia) The YingHua Chinese Immersion Academy and the United Fund of New York, NY.

John was born and raised in New York City, NY and now lives in Saint Paul, MN; he also has three grown children. He also has the proud distinction of being a two-time Clio Award Winner for his outstanding work in the Advertising and Marketing industry.